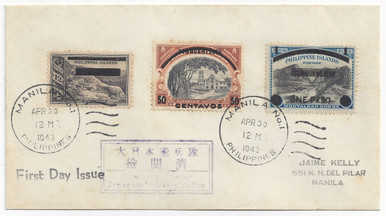 Philippines Japanese Occupation April 30, 1943, 50c on 1p DOUBLE OVERPRINT ERROR (#N6a) with 1p on 4p (#N7) and 12c (#N2) tied by MANILA, April 30, 1943, First Day of Issue cancels on local cover with violet Military Censor's handstamp. 2005 Philatelic Foundation certificate stating that it is genuine. The Error is Very Fine with slight oxidation. Garrett, in his comprehensive book, A Postal History of the Japanese Occupation of the Philippines, states that the #N6a "is reported to have occurred on one pane of 25 subjects...The author has not seen an example." Additionally, this is the only example certified as genuine by either the APES or the Philatelic Foundation and the only example ever seen by myself or any knowledgeable collectors that I've asked. An Outstanding rarity of Japanese Occupation and Philippines philately and an Important & Impressive Showpiece!

This product hasn't received any reviews yet. Be the first to review this product!